Apart from the major tanks in the palace complex, around six rectangular and one square tank (hauz) – to store water were also located during the course of the survey.

Of these, five were found in the so-called Indāra Valley, near the Ajmeri Darwaza, an area reserved for pleasure resorts and gardens. The sixth water tank is located in the residential area reserved for the nobility on the north-eastern spurs of the ridge. This tank, which has recently been discovered, is situated between the nobles’ quarters and the rows of excavated shops of the Bāzār-i buzurg-i Sangin (the large stone market). 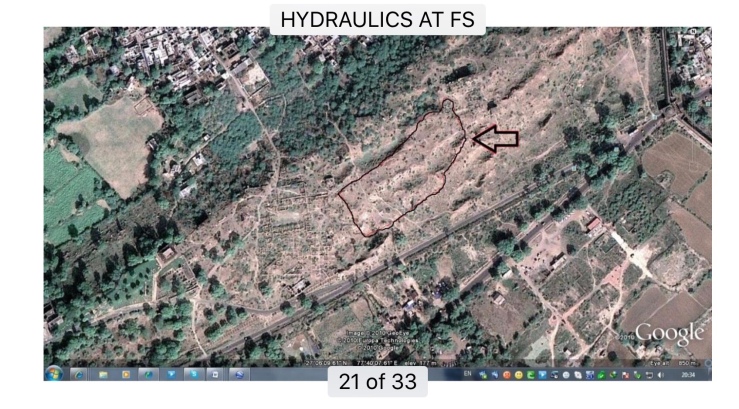 This was a very large water tank to meet the needs of the noble’s houses, the market, as well as the sarāi located near the Agra Gate.

A square water tank is situated atop the ridge on the extreme west, at a distance mid-way between the old Chishti quarters and the Chor Khirki. A modern cremation

ground is situated adjacent to this tank.

This tank in many of its features resembles the Anūptalāu situated in the Daulatkhāna. Constructed of rubble stone, each side of this tank is provided with steps. In the centre is a square platform which is connected with a cause-way on all the four sides. It is interesting to note that all around this tank are the ruins of structures, which unfortunately have yet to be studied. The area also yielded a large number of low and medium quality blue ware sherds.

Water harvesting appears to have been the major objective of the tanks situated on the top of the ridge. The major source of water for these tanks was the rain water which

was harnessed into them through slopes and channels. We have the testimony of Abul Fazl that rain-water mixed with Ganges water was used to prepare food in the Royal

Kitchen. A survey of the existing water channels confirms this statement. The tank situated near the matbakh (Royal Kitchen) and the office (yātishkhāna) of Muhammad Baqir Sufrachi, the superintendent of the Kitchen establishment was, and still is, filled by the rainwater falling on the courtyard of the Daulatkhāna. Constructed on the tapering spurs of the ridge, this tank, popularly known as the ‘Hauz-i-Shīrīn‘ (the Sweet Water

Tank), is raised on vaults.

Similar harvesting of rain-water appears to have been resorted to in the Jāmi’ Masjid Complex. The water “falling on the floor of the Mosque as well as the Tomb of Shaikh Salim Chishti was collected in two underground covered water-tanks (birka) one of which was constructed by the walling up of the vaults forming the courtyard of this

mosque. The other was situated beneath the langarkhāna to the south-east of the Buland Darwaza. Both were supplied through a labyrinth of underground channels collecting rain water falling on the structures situated within the mosque. Water from the ceiling of the mosque and the Tomb of Salim Chishti was also directed through similar drains constructed below the ground to the octagonal bāoli and tank (jhālra) situated to the west of the Buland Darwaza.

The tanks situated in the plain (e.g. the Indārā Valley) were, on the other hand filled by drawing water from the wells situated nearby. The survey revealed some of the water-channels connecting the tanks with their wells.