complex, the nobles’ quarters and houses of the main civic population were located.

A survey of Fathpur Sikri reveals that the imperial system of water-supply was divided into two sections – the Northern water works, situated near the Hāthipol and the

Southern Water works, near the Hakim’s Baths. These water works, were apparently designed to meet the entire need for water in the Palace Complex as well as the town of Fathpur Sikri.

The Northern Water Works appear to be more elaborate and technically sophisticated. We are fortunate that Peter Mundy gives a very precise description:

The kings’ howse or Moholl stands on the highest hill, within which are aboundance of Courts, Conveyances, galleries, chowtrees (chabūtara) , Arches, pillars, Tancks, Chaboochaees (Chāhbacha), private roomes, all yery rich, curious, and full of invention of painteinge, carvinage, etts; also a little garden. The water to water it is also to fill the Tancks alofte, and for their use is drawne from the valley, first into one Tanck and then from that into another higher, and soe into 4 or 5 untill it came alofte, by that which wee in Spaine call Noraies.

At the first stage, the subterraneous water was raised through the construction of an octagonal bāoli below the Hathipol. This bāoli is shaped in the form of an irregular

octagon, a chamfered square, with each of the principal sides measuring 15.45 metres.

The chamfered sides of the octagon have lengths of 4.60 m. In the middle of this structure is an octagonal well with each side 2.90 m in length. To the north and south of the well are placed two octagonal chambers, the raised vaulted ceilings of which are visible as octagonal platforms from above. A 0.23 m – wide water channel carried the water from this bāoli to an artificial well situated to its west. This water channel runs on top of a 12.15m long and 2.55 m broad aqueduct.

The artificial well (chāh ba chāh, more popularly, chāh-bachcha, receiving water from another well) which acted as the second stage for lifting water is a rectangular structure with two vaulted chambers flanking the circular well on two sides. The well itself is 10.6 m deep and 3.96 m in diameter. From here a water channel (0.23m in width) took the water to a second storage well, which again is flanked by two vaulted chambers. Between the two storage wells, the water was carried to an approximate distance of 10.50 m.

The water brought to this second storage tank was then lifted to a large rectangular tank situated towards the south.

A water channel then emptied the water into another rectangular trough constructed at the level of the floor of the Hathipol. Until this stage the water was raised to an approximate height of 30 meters from the ground level.

Just above the water trough are constructed projecting spaces to further raise the water to the fourth stage atop the roof of the quadrangle to the east of the Hathipol. A set of aqueducts diverted the water from this roof to the two storage tanks constructed on the first floor of the structure flanking the second Gateway after the Hathipol.

From here the water was again raised to a fifth stage, and, through a channel running atop the gateway entered the haramsara complex through the north-western corner of the so-called “Birbals’ House” quadrangle (the first Imperial Palace) .

Another branch of the water channel took the water through the northern walls of the Hathipol daftarkhana to the bureaucratic establishments constructed below the hauz-i Shirin.

A question which arises at this stage is, how the water was raised to the succession of the chāhbachāhs. We have already quoted Peter Mundy wherein he mentions the use of ‘Noraies’. Bishop Heber visited Fathpur Sikri In 1825 AD.

Describing the water works, although confusing its location and attributing it to be adjoining the Jami Masjid, he writes:

… and the whole hill on which the palace stands bears marks of terraces and gardens, to irrigate which an elaborate succession of wells, cisterns, and wheels appears to have been contrived adjoining the great mosque, and forcing up the water nearly to the height of its roof. The cisterns are still useful as receptacles for rain-water, but the machinery is long since gone to decay.

Two Akbarnama paintings depict this water lifting device which was used to raise the water in the northern water works. (See plates 1&2) The first miniature, which was

designed (or outlined; tarah) by Tulsi and painted ( amal ) by Bhawani, depicts a Persian wheel drawing water from a well near the Hathipol, which is under construction. 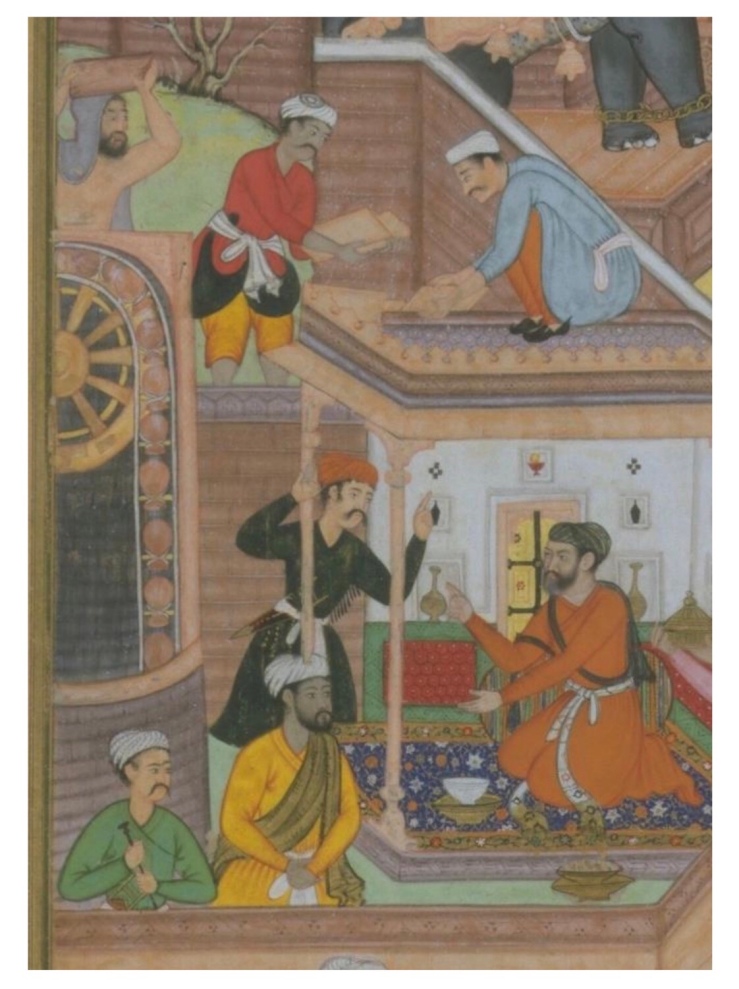 The second depicts Persian wheels at two stages near the Hathipol. 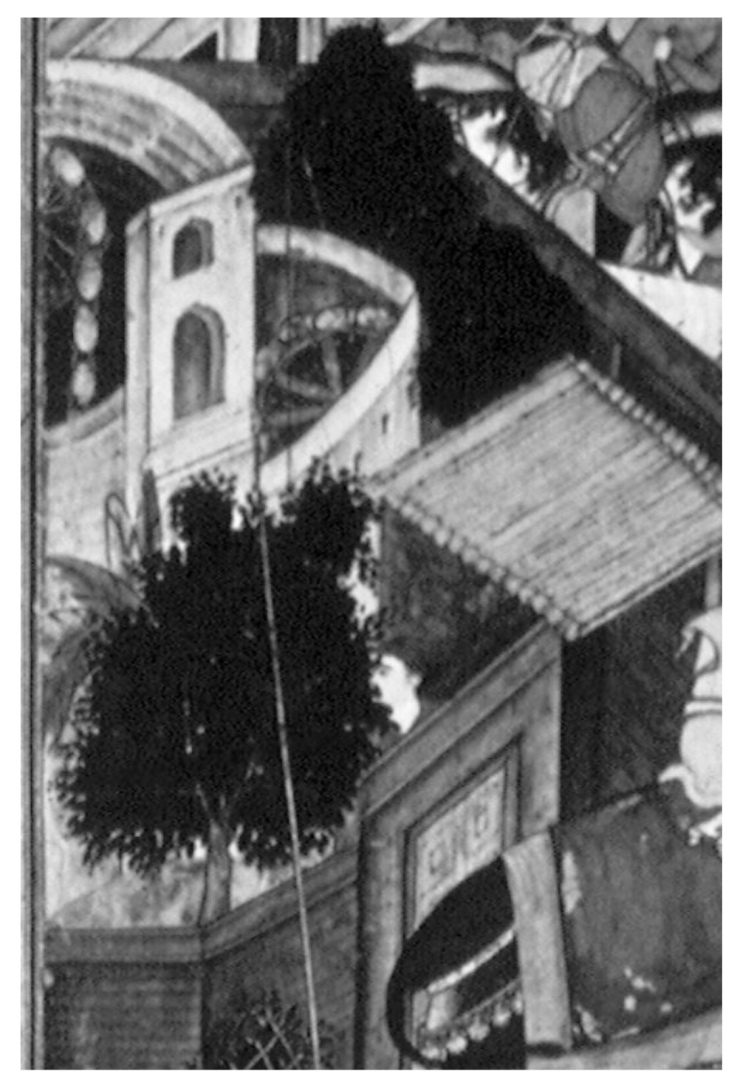 The Persian wheel, as we know, was a device which was based on the technique of pin-drum gearing. It comprised of a wheel, fixed on the mouth of the well, which contained a string of pots (māla). This wheel atop the well was connected with a second wheel through a shaft. The second wheel fitted with wooden pegs (pins) was rotated

vertically by horizontally rotating a pin drum (i.e. a double-drum, whose two layers are joined at the rim by pegs placed at the same distance as on the rim of the other wheel. 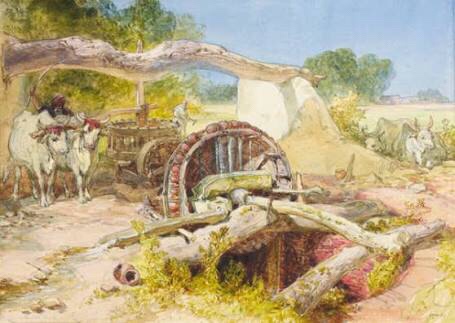 The horizontal motion to the drum was provided through draught animals harnessed to it through a shaft. According to Abul Fazl Akbar had invented a way of raising water to a

great height from a low level through the water wheel. To quote:

His majesty made such water wheels (daulāb-ha), and such (gear) wheel (gardūn-ha) were fixed thereon, that water may be carried to a height from distant low-lying places.

This was due to his placing the pin-drum at much higher level than the draw bar of the oxen turning round the axle. This meant that the water would be drawn up through

the chain of pots to a height considerably above the oxen, where the mouth of the receiving aqueduct could now be placed. It happens that two paintings in Nizami’s Khamsa prepared in Akbars atelier illustrate such a device.

A closer took at the octagonal bāoli of the Northern water works and its storage wells reveals the provision of stone shafts which once held the vertically rotating wheel of pots. The draw-bars which rotated this wheel were placed in the two vaulted chambers, which we have noted flanked the well in the bāoli and the two storage wells. Similarly, protruding stone beams fixed atop the rectangular cavities near the Hathipol lifted the water atop the roof of the eastern quadrangle. Thus we see that the Northern waterworks was a complex of storage tanks, storage wells and Persian wheels which helped the water to be raised at five stages to reach the level of the Imperial complex atop the ridge.

The Southern water-works which centred around the bāoli attributed to Shah Quli, near the Hakim’s Baths, survives in a much more dilapidated condition. From here the water was supplied not only to the daulatkhāna but also to the civic population living in the areas south of the ridge.

Shah Quli’s bāoli appears to be the largest step well at Fathpur Sikri and comprises three storeys surrounding the octagonal well. Water drawn from this step well with the cutlasses fixed in the two chambers adjoining the well was carried through ducts to a raised storage tank situated in front of the Hakim’s Baths. From here the Persian wheels lifted the water, which was then distributed through aqueducts into three directions, the north, east and west. In the north, the water emptied into a tank situated near the massive ‘Sukh tāl’ adjacent to the Imperial Baths, from where it was taken to the Baths and garden of the daulatkhana.

In the area between the southern wall of the daftarkhana and Shah Quli’s bāoli a number of piers which once carried water ducts still survive. Similar aqua ducts appear to have been constructed to the east of the storage well. During the course of the survey, bases of two such piers were encountered.

The water thus supplied from the northern and southern water works to the Imperial complex was distributed to various sections through the conducts running between the wells. Unfortunately, we encounter a number of gaps in these channels running through~ the Imperial complex. This probably is due to the renovation work which was undertaken under Lords Mayo and Curzon.

A physical survey of Fathpur Sikri reveals that still enough evidence survives to connect the various palace complexes. The major supply to the Imperial complex was through the Northern water works, whereas the Southern water works catered mostly to the needs of the civic population a function which it still performs.

Apart from the bāolis, wells and tanks, a number of piers of the aqua ducts survive around the city of Fathpur which give us same idea of how water was carried from one area to another. For example a series of such piers survive in the area below hauz-i shirin, on the slopes of the northern ridge, below the so-called Tansens’ Bāradari and the excavated residential structures. These piers carried the aqueducts which connected the Northern works with the large water tank situated near the nobles, houses, mentioned earlier. This massive tank is 28.10 m. wide and 67.40 m long. Probably the entire needs of the Eastern area were met through the water stored in this tank.

It is also important to note that the individual residential structures, which have been excavated at Fathpur Sikri in most cases, seem to have had their own water storage tanks.

There are still areas in Fathpur Sikri, for example the areas in the South-west about which not much is known. A number of wells survive in that region, but they appear to be insufficient to cater to the entire needs of the population who must have settled there, The water must have been carried from here to individual houses through water carriers. 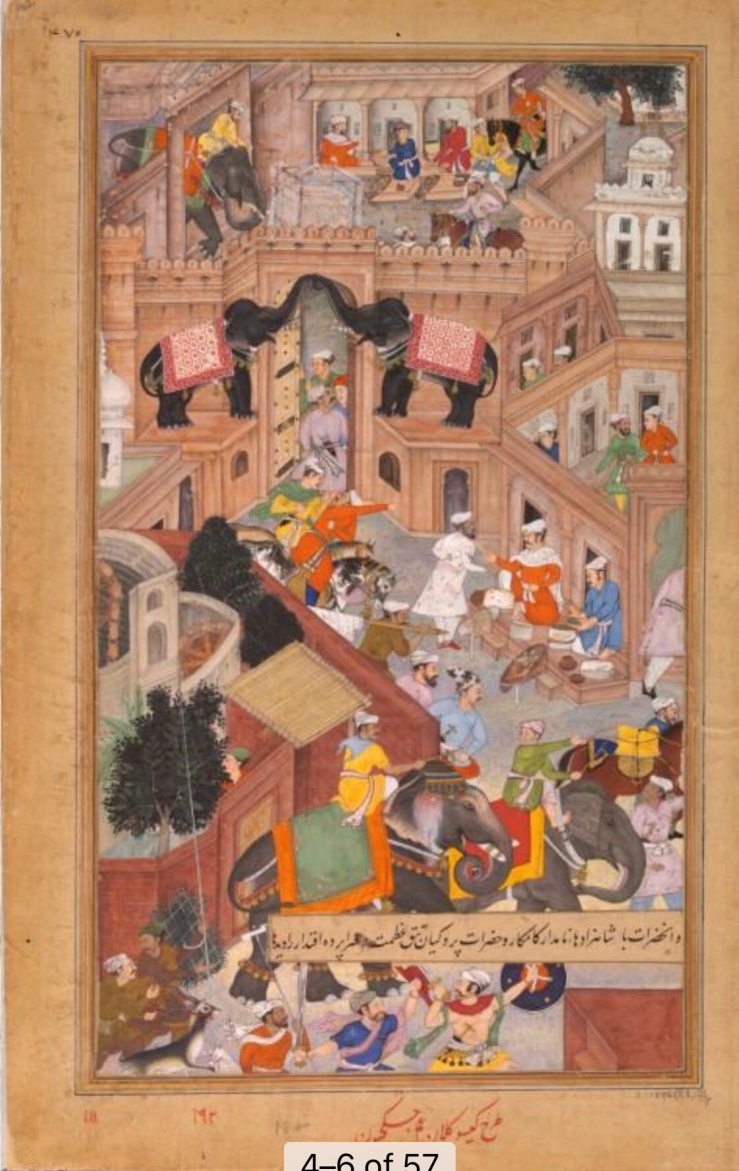