The demand for potable and irrigation water at Fathpur Sikri, apart from the lake, was also taken care of by digging a large number of wells (chāh) and constructing a number of bāolis (step-wells) scattered all over the town.

We have evidence that among Babur’s constructions at Fathpur Sikri there were at least two step-wells and a well.

Dealing with the renunciation of wine during his campaign against Rana Sanga, Babur writes (in AH.933/Feb-, 1527):

At the place where the wine was poured upon the ground, a well was ordered to be dug, built-up with stone and having an almshouse beside it. It was already finished in Muharram 935 (Sept. 1528) at the time I went to Sikri from Dho1pur on my way back from visiting Gualiar.

An inscription of the same year (933 / 1526-27) was discovered during the 19th century, adorning the well of a step-well known as Indārāwāli bāoli. The inscription

At the command of Zahiruddin Muhammad Babur, Badshahi Ghazi (May Allah perpetuate his realm and rule) the construction of this well was, through the divine grace, completed in the year 933 A.H. after (the Emperor) had returned conquering and victorious from his campaigns against the misbelieving Rana Sanga. 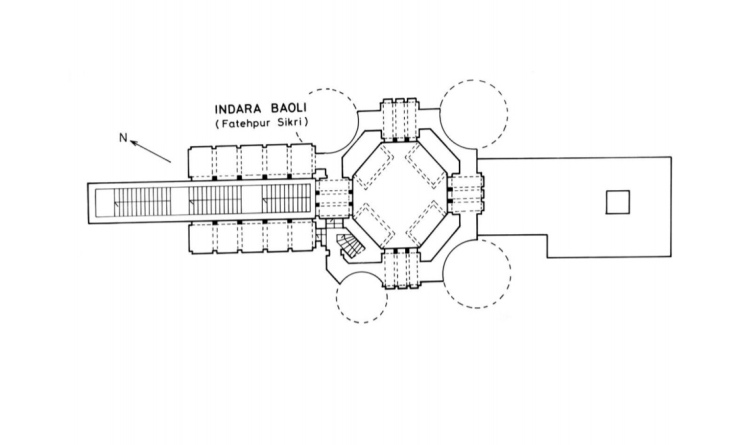 The information contained in the Bāburnāma and the location of the inscription suggests that the so-called Indārāwāli bāoli was constructed some time in 1527 on the orders of Babur. Architecturally, the bāoli resembles the well of the Bāgh-i Nīlofar constructed at Dholpur upon orders issued the same year.

At both the wells, a wide chhajja like octagonal ledge replaces the coping, which is supported by carved “Hindu” brackets. A deep flight of steps, leads to the octagonal well. Interestingly there are 13 steps up till the first platform, then 12 and ultimately 11 which descend to the water level. There are pillared galleries (dālān) at each level of the shaft which are adorned with rosettes, carved brackets and ‘chandrashālās’ (niche-like forms) on the pillar bases which are typical features of Babur’s time.

The well is octagonal and was once provided with pulleys. At the exterior, four sides of the octagon are curved into circular tanks. A rectangular tank to collect water is also provided for at the back of the octagonal well. Aligned to the North-East of this bāoli are the remains of the Chahārbāgh. Although the site is now a cultivated field, the contours of the garden are still discernible. A bāoli or well could never have stood in isolation. Probably this

garden of the Indārāwāli bāoli was also constructed alongside with the step-well, and was thus a Baburi Garden. 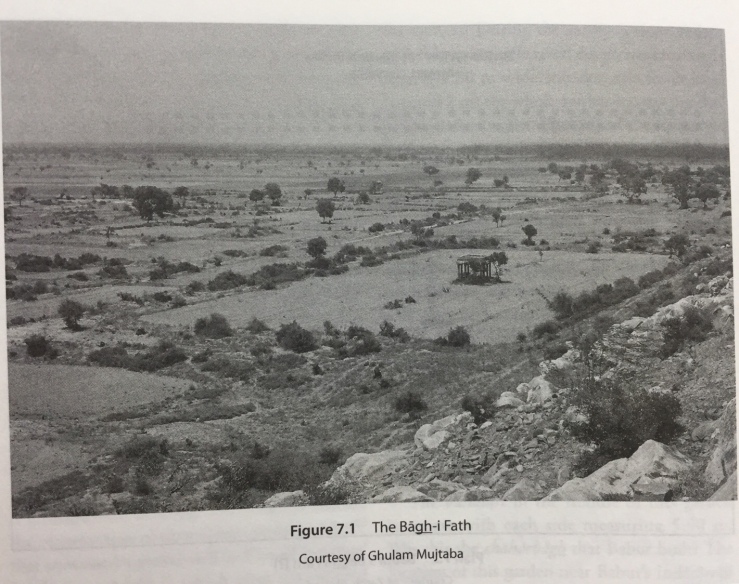 Towards the west the remains of another bāoli are traceable, the stones (khanda in the local usage) of which having been shorn away by the present owners who use this area as a tilling field.

While interviewing a number of senior residents of Sikri, Nagar and Fathpur during the course of my survey in the first week of March 1996, my informants spoke of the existence of as many as 52 bāolis and 108 masonry wells till the fourth decade of the present century. The survey of the area however revealed 14 stepwells and over 60 wells, all of the period when Fathpur Sikri was built.

Among the stepwells or bāolis which were located during the course of the survey, some were in a very dilapidated condition. Since these may soon disappear, it is worth recording them here:

(4)bāoli to the west of Babur’s Bagh-i Fath (only traces remain);

(5) bāoli near the so-called ‘Matiya Mahal’, near the Qush Khana (only outlines visible) ;

(6) the four-storeyed grand bāoli around 300 metres outside Ajmeri Darwaza;

(7) Moti Bagh bāoli, now in the main bāzār of Fathpur, adjacent to the northern Gate of the four-laned Akbari bāzār, popularly known as ‘Pukhta Sarai’;

(11) bāoli around 300 metres outside AgraDarwaza, on the Agra road, (besides the modern wine-shop) ;

(12) bāoli to the east of the Agra-Bharatpur road, outside the Lal Darwaza;

(13) bāoli to the north of the Bharatpur-Agra road towards Nagar;

(14) bāoli to the north-west of the Buland Darwaza popularly known as the jhālra.

As can be seen from the appended plan depicting the placement of the sources of the water-supply, these step-wells were fairly evenly located all around the medieval settlement of Fathpur Sikri. The survey further revealed that nearly all these bāolisexcept nos. 4 and 5) still contain water, and need only minor repairs to make them functional.

Out of these 14 bāolis which could be located so-far by the author, eleven belong to Akbar’s period; one (no.12) pre-dates the Mughals, to judge from the carving of

the stone, probably a remnant of the Sikriwal Rajput rulers. Another belongs to Babur (No.2). Bāoli No.3 was constructed during the reign of Shahjahan. Five of them (Nos. 1, 2, 7, 9, &14) have octagonal wells, while the rest are square. Apart from being a regular source of potable water, these step-wells also acted as pleasure-resorts where the weary travellers could rest.