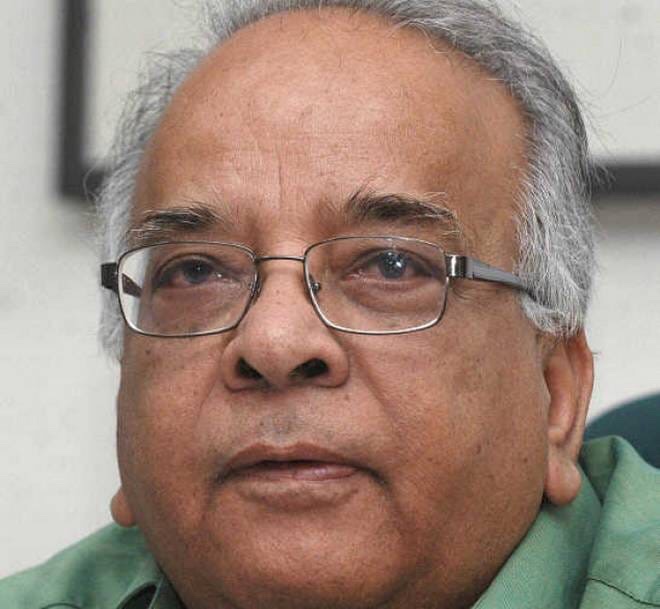 Recent passing away of Professor Mushirul Hasan removed many cobwebs from my memory and I was transported back around half a century to a period when our families were not only very close to each other, but also neighbours. We used to live in an old evacuee property known as Azhar Manzil, situated on a corner of a large fresh-water pond popularly known as “Hāthidūba”: it was rumoured that its depths were enough to drown a fully grown elephant! In fact it was situated just behind the Azhar Manzil.

In front of our house was a large barren field with just a skeletal ruins of a house popular as “Bhūt Bangla”, it being a common belief that if anyone tried to renovate it or roof it, he would immediately die! It’s owner was MC Chhagla, a well-known personality who lived in the newly built Chandigarh. Beyond it, at an angle, was the rambling and ochre coloured Hamid Lodge, the residence of Nawwab Hamid Ali Khan ( Hamid Chacha, as I used to call him!). He was a bespectacled tall thin man with a flowing white beard and an extremely loud voice. I remember him always wearing a sherwani with a slender silver handled walking stick.

And just where the front lawn of Hamid Lodge finished was the road leading to a “chauraha” comprising of a few shops, mostly of a few tailors, one or two very small general stores and a small bakery. This market later on, was going to be known as “Amīr Nishān” due to a house of a similar name situated there.

Between the chauraha and the Hamid Lodge (in fact connecting both) was the Hyder Villa, which had once belonged to the father of Salman Hyder ( and husband of Mumtaz Apa, the founder Principal of Abdullah Girls College). From him it was passed into the hands of a certain Dr. Seymour from whom Dr Muhibbul Hasan (father of Mushir) had bought it after coming back from Calcutta.

Our families, apart from thus being neighbours (at a time when Aligarh was a city of large open spaces dotted with kothis), were also related in another way: My father, before partition had been the chief librarian of the Mahmudabad Estate and been a close friend of the last Raja of Mahmudabad, Muhammad Amir Ahmad Khan. Muhibbul Hasan Sahib was related with that family. 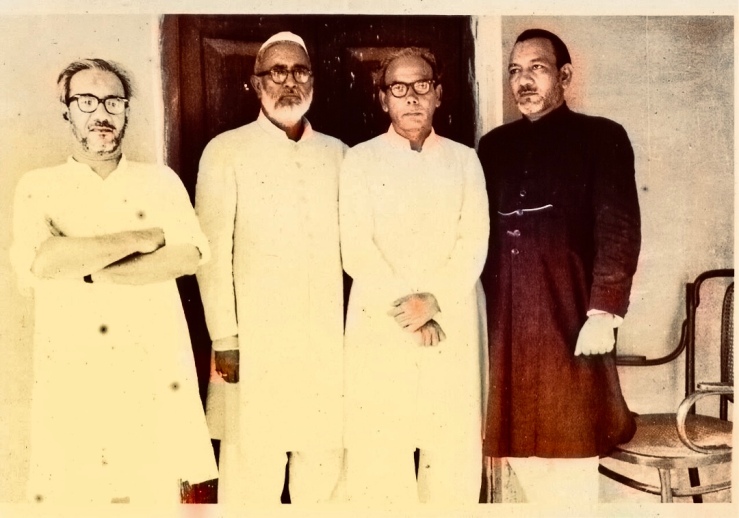 Mushir’s mother was a friend of my mother and that is why we always called her “Khālā” [maternal aunt] and her husband as “Khālū” [maternal uncle]. Not a day passed when either they were not visiting our house, or they ours.

Khālu had first served as a lecturer in Calcutta University and then at AMU. He also served for sometime at Jamia Millia Islamia and the Kashmir University, Srinagar. He authored two very important monographs: one on Babur and the other on Tipu Sultan. Both the works remained the last word for decades. It was only after Stephen Dale’s work on Babur that Muhibbul Hasan’s biography of Babur found a competitor in the field.

Khālu had a daughter (Salma Baji) and four sons: Mujeeb, Najmul, Mushir and Najeeb. Mujeeb was doing Civil Engineering and destined to first go to Pakistan and then to US, where he retired after serving in the US Army and the NATO force as a civil engineer. He first married a Kashmiri girl and then later, after their divorce, one of my sisters, Azra.

Najmul Hasan (Sunny, as he was called by friends and family) after his education became a journalist. His last assignment was as a correspondent of Reuter’s posted to cover Iran-Iraq War, where he died after stepping over an Iraqi landmine. His wife Babra belongs to Rampur and still lives with their daughter in Delhi.

Mujeeb ul Hasan (Mushir’s eldest brother) and my sister, Azra in Mushir’s House during the period of his illness after the accident

Mushir got his early education at Calcutta where Khālu was then posted. He soon joined ST School (Minto Circle) at AMU. From Aligarh he also did his graduation and post graduation in History. Amongst his brothers (including the youngest Najeeb) he was the most social, popular and active. He would take part in debates, recite nauha, as sāhib-i bayāz, in the Shab-i Āshūra procession taken out from our house, and participate in student politics. Once he also fought for the AMU Students Union elections and stood for the post of Vice Presidentship.

At AMU he and his father were identified with the Left. Like most others, Mushir too chose to offer courses in Medieval Indian History and studied from teachers like Muhammad Habib, Irfan Habib, Nurul Hasan and Khaliq Ahmad Nizami amongst others. At one place in his writings, Mushir does lament that Aligarh had hardly anything to offer as far as Modern period in history is concerned. One of his angst was that he was taught about all and sundry in Medieval Indian History but nothing about events much closer in time, especially the history of India’s partition, political role of Muslims or that of Sir Syed Ahmad Khan.

Let us not forget the time in History that Mushir was studying at Aligarh! It was in 1950’s that the first Prime Minister of India, Jawaharlal Nehru had ordained special grants to Aligarh for Medieval Indian History. And then just a decade back, Aligarh had survived the partition with most of it’s staff and students migrating to the newly created Nation! The cross of Partition at that time still lay heavily on Aligarh! The neglect of modern and contemporary period at Aligarh of those days is understandable.

After a brief stint at Ramjas College, Mushir was destined then to go to Cambridge from where he completed his PhD. His thesis on Nationalism and Communal Politics in India during 1885-1930 broke a new ground when it was published, and subsequently ran into many editions. As if to counter the drawback at Aligarh of having neglected more recent times and the Muslim question, he later, did meticulously well-researched works on India’s partition which too got wide acclaim across the globe.

When he returned back to India from Cambridge, Mushir started his long innings at Jamia Millia Islamia where his father had once served. There he was appointed as one of the youngest Professors and slowly and gradually emerged as its Vice Chancellor.

Mushir Bhai in his Office

Probably JMI doesn’t owe as much to any one else as it does to Mushir: he converted it from being a glorified “madrasa” to a University of world repute! Most of its famed institutes and centres were created by him. He modernised the campus, gave it academic excellence and took up the charge of constructing new buildings and structures. In fact he is taken to be the Shahjahan of Jamia!

As I got the news of his death, I was also reminded of the type of a VC that he was! I will narrate only some instances of which I was a personal witness. Having been used to the regal style of the functioning of the VCs at Aligarh, each of these incidents were not only refreshing but came as a surprise! In AMU a VC is a “khudā-i kul”, of whom even a Balban would be jealous of!

Once I had gone to meet my eldest brother in law, Professor Rizwan Husain, who was a Visiting Professor at JMI. He and my sister, Najma (Bajjo) were staying in one of the rooms of the University Guest House. I found Mushir walking around on the campus un-inhibited and un-escorted. He was simply walking alone!

At another occasion when I had gone to a seminar, we saw him emerge from his office. He saw us standing in the lawns. Instead of taking the road, he simply jumped a fence and came to us all smiling! And then I remember him refusing to take a plate out of turn but standing in the queue and insisting to wait for his turn! That too in a function on his own campus where he was the VC!

His humbleness had always been there! I also remember when I was frequently visiting Delhi at a time when we were waiting for the German Visa for my sister married to his elder brother who was serving in the NATO army those days. Mushir was living in a house at JNU allotted to his wife, Zoya. Express orders were that we (I and one of my friend) were to stay with him. He would see to it that we were properly fed and taken care of! And then he would, in the evenings, sit with us and joyfully hear the “Aligarh Stories”!

Mushir never had any airs or pretensions. While interacting with him you could never make out that he was the same man who had authored around 50 books, or that he was or had been a VC or was the Director General of the National Archives of India: a charge which he took after leaving Jamia. Once I was there at the National Archives for a meeting held to acquire certain manuscripts and documents. There too his unpretentious nature was in the forefront. The way he was interacting with his subordinates was something in contrast to what generally is the case!

He had a very soft corner for anything affiliated with Aligarh, which though he kept calling as a “small town” with “limited intellectual capacity”. He would also condemn those at AMU as “ kueñ ke mendhak” (frogs in a well)! But only a fool would be misled by these epithets. His love for his alma mater was such that he could never ignore anyone related with it. Be it the petty tailors of the Amir Nishān or any student, researcher or teacher of Aligarh: if anyone needed any kind of help or push, Mushir was there!

Amongst us “youngsters” who looked up towards him, he was very much fond of Najaf Haider, who now is himself a Professor at JNU. 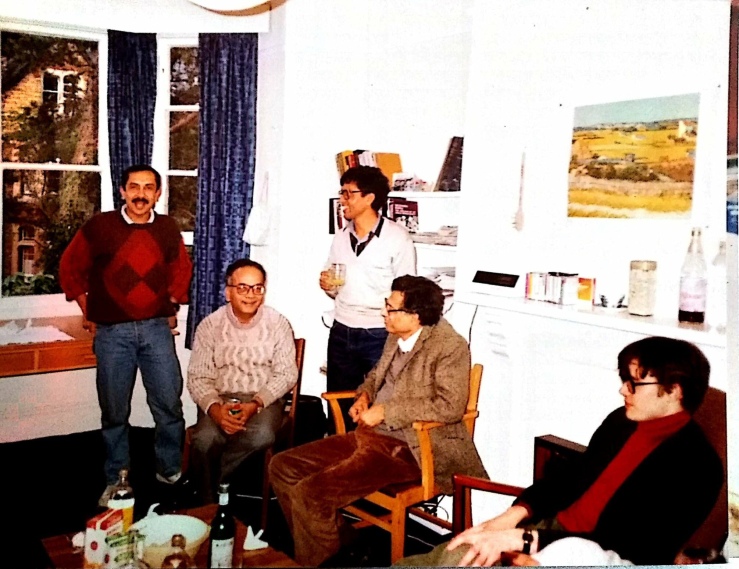 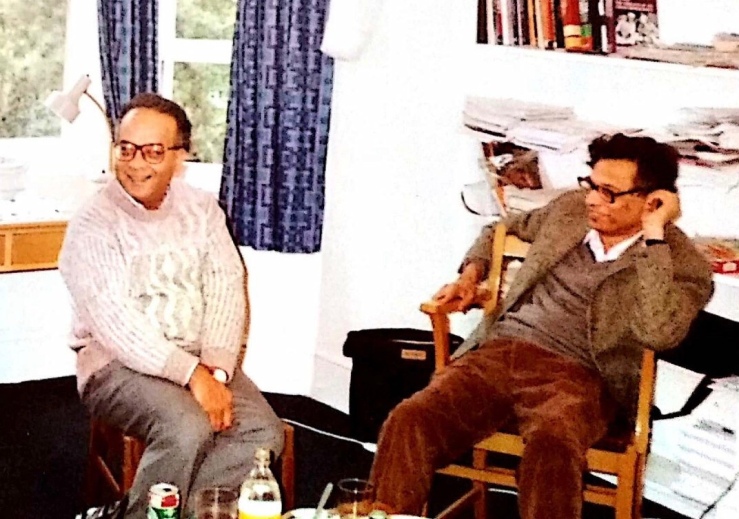 Academically I never had any direct contact with him, I having confined myself to themes in Medieval Indian History with which he was apparently never interested. Once however he told me that you keep writing papers and articles. They don’t count in today’s world: What counts is authorship of books! And when I told him, one cannot become an author of multiple books overnight, he say: “edit them!“

He was perhaps correct to some extent!

Mushir did not die on 10th December 2018: He finally left us all on that date. He actually died the day he met with that horrible accident on a Haryana road way back in 2014. The accident left him physically and mentally in a condition that he could not keep himself engaged in his academic and intellectual activities. That year, I remember the Indian History Congress offered him the General President-ship. He had to decline it. It was that day that we realised that we had lost Mushir Bhai!

Mushir Bhai (after the accident) with Zoya and his friend Professor S. Irfan Habib

He finally left as he had lived! Two namāz-i janāza were offered for him: one at the Shi’a centre, Bābul ‘ilm, and the other at the Jama Masjid of Jamia. Not only Shias and Sunnis but even others joined in the prayers. Both men and women walked him through his last journey. He finally came to rest on the campus which he served and of which he was labelled as the Shahjahan! Many a satrap had tried to hound him out, he worsted them all at that: he would instead remain in Jamia till eternity!