It was on Friday 12th January 2018 that I had the opportunity to visit the World Heritage Site Golestan Palace Complex in Tehran. It is one of the oldest historic monuments in the city of Tehran, and belongs to a group of royal buildings that were once enclosed within the mud-thatched walls of Tehran’s arg (citadel). It consists of gardens, royal buildings, and collections of Iranian crafts and European presents from the 18th and 19th centuries. 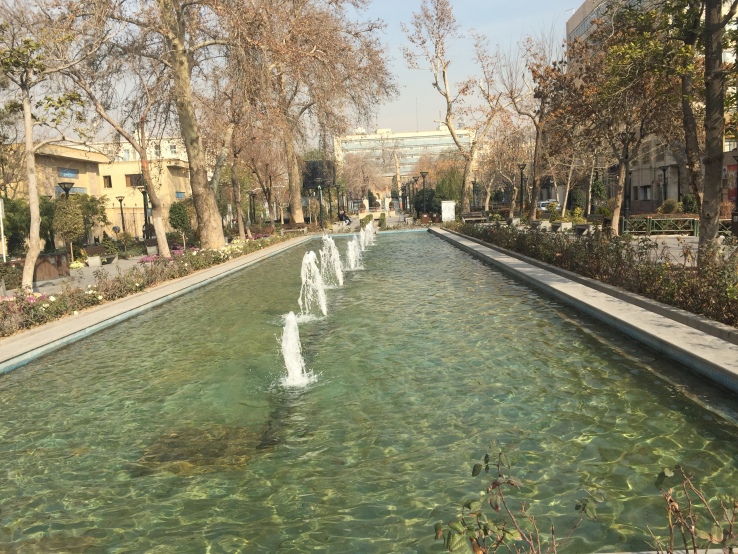 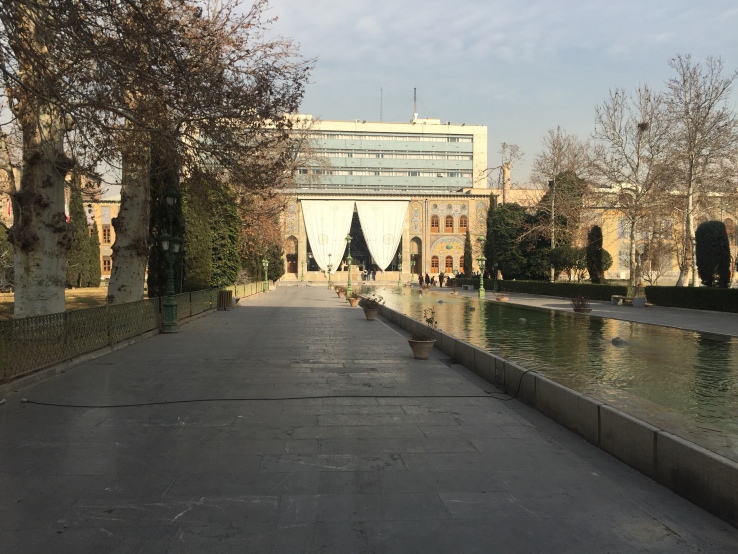 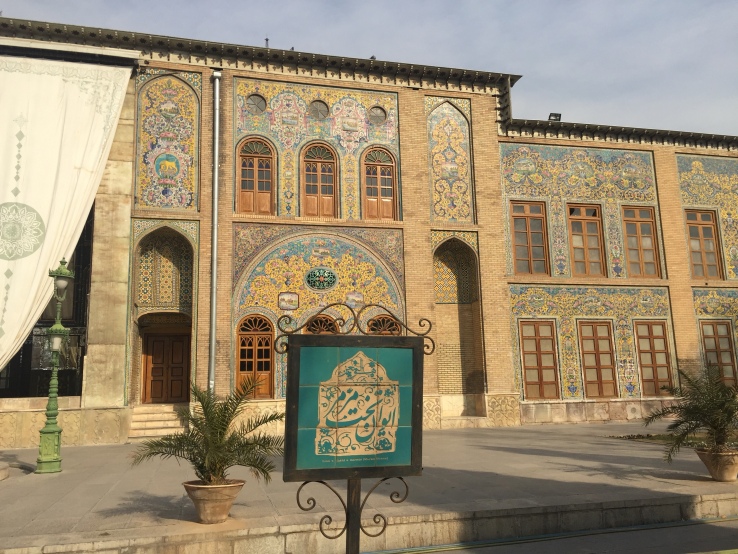 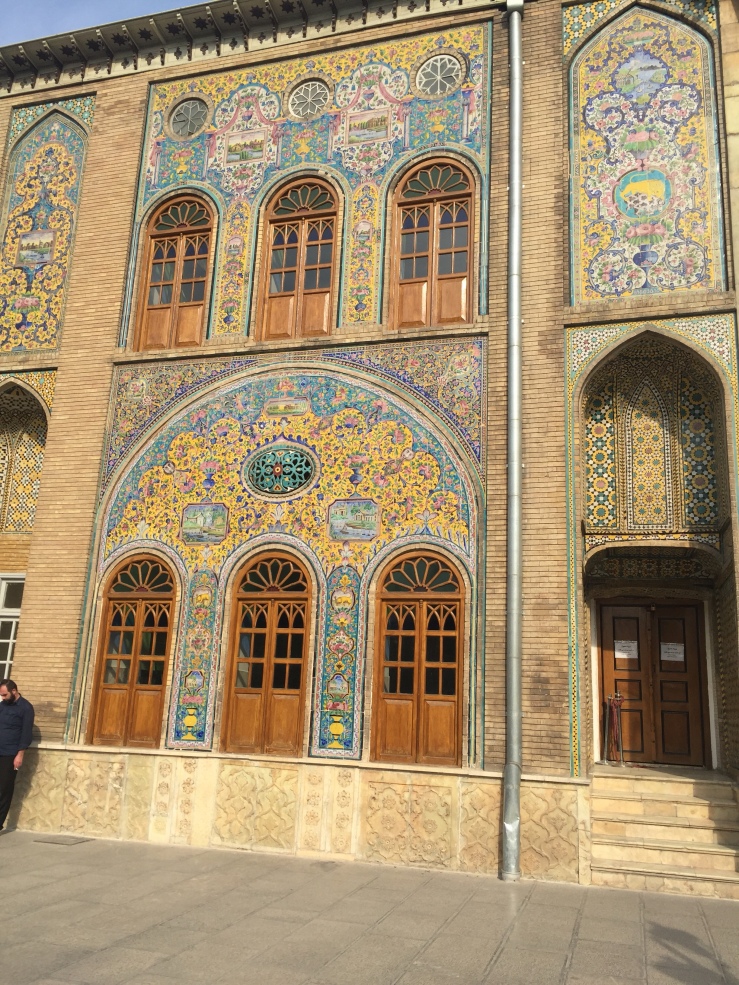 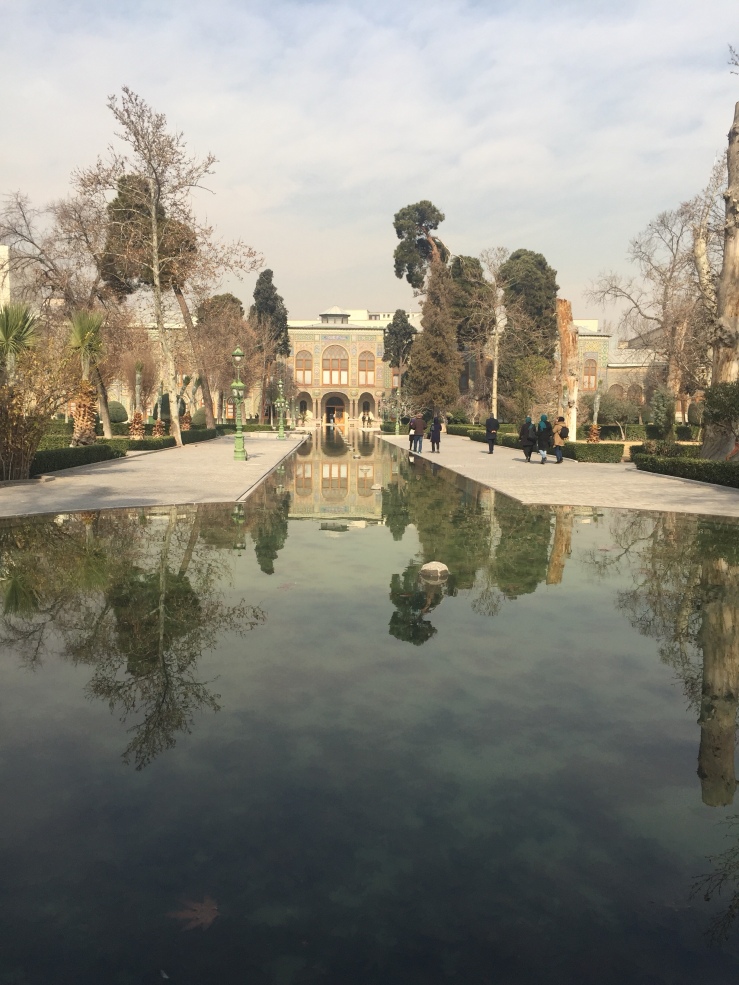 The palace was rebuilt to its current form in 1865 by Hāji Abul Hasan Mi’mār Navāi.

During the period of the Pahlavis (1925–1979), the Golestan Palace was the hub for formal royal receptions.

The most important ceremonies held in the palace during the Pahlavi era were the coronation of Reza Shah (r. 1925-1941) on the Marble Throne and the coronation of Mohammad Reza Pahlavi (r. 1941-deposed 1979) in the Museum Hall. 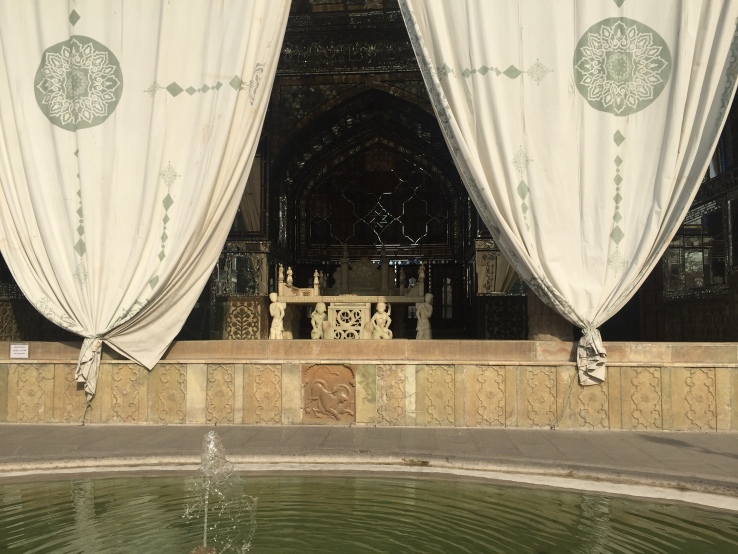 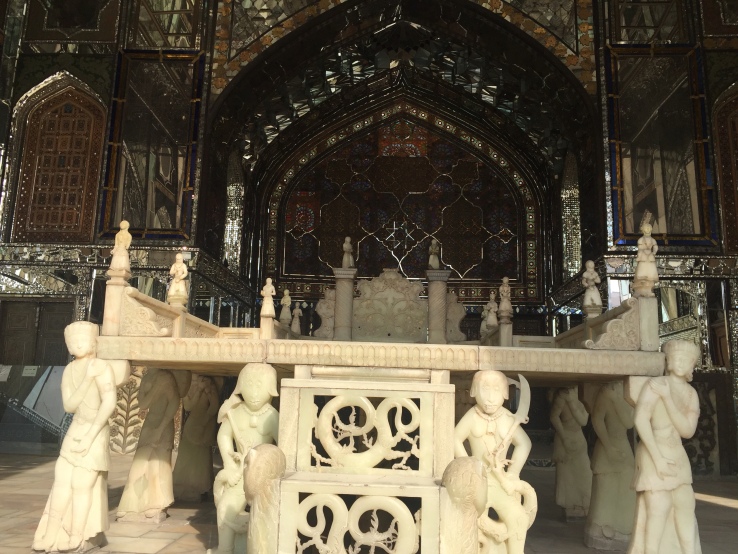 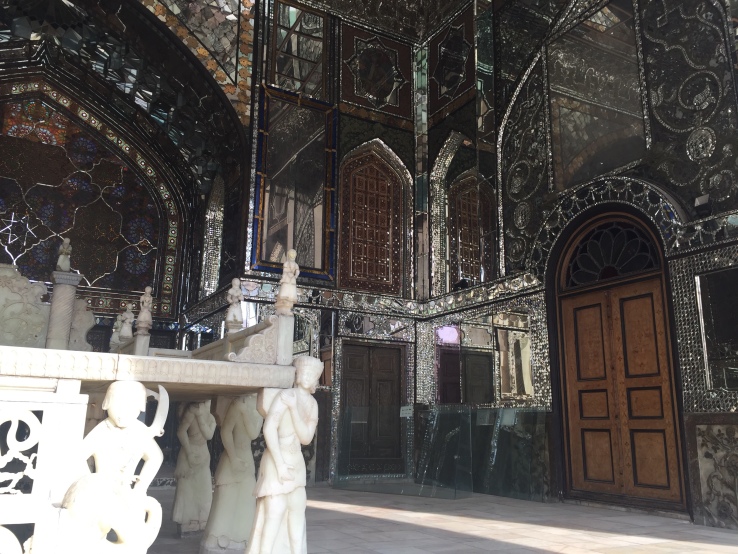 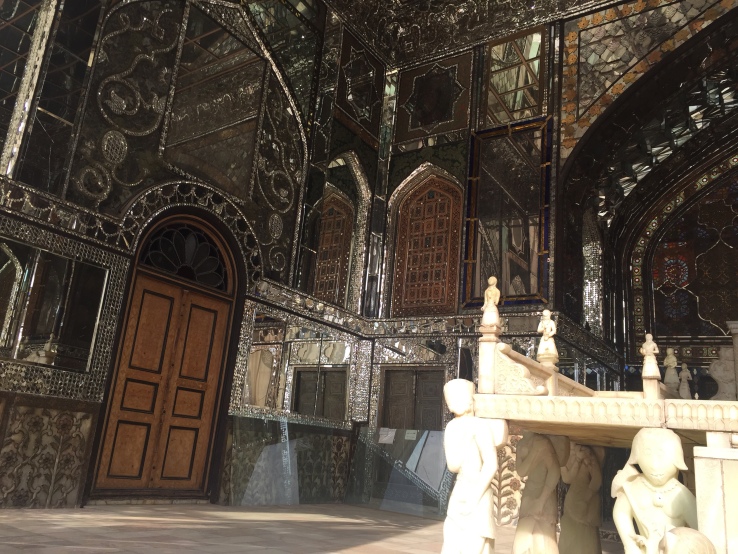 This Marble Throne, was built in 1806 by the order of Fath Ali Shāh of the Qājār dynasty (r. 1797–1834). Adorned by paintings, marble-carvings, tile-work, stucco, mirrors, enamel, woodcarvings, and lattice windows, the throne embodies the finest of Iranian architecture. The Marble Throne is one of the oldest buildings of the historic arg. It is situated in the middle of the terrace (aiwān), and is made of the famous yellow marble of Yazd.

It is built of sixty-five pieces of marble, and was designed by Mirza Baba Naqash Bashi (“head painter”) of the Qājār court. Muhammad Ibrahim, the Royal Mason, oversaw the construction and several celebrated masters of the time worked on the execution of this masterpiece. The architectural details, and other ornaments of the terrace, were completed during the reigns of Fath Ali Shah and Nāsiruddin Shah (r. 1848–1896).

In between 1925 and 1945, a large portion of the buildings of the complex were destroyed on the orders of Reza Shah. He believed that the centuries-old Qajar palace should not hinder the growth of a modern city.

In the place of the old buildings, commercial buildings with the modern style of 1950s and 1960s were erected. 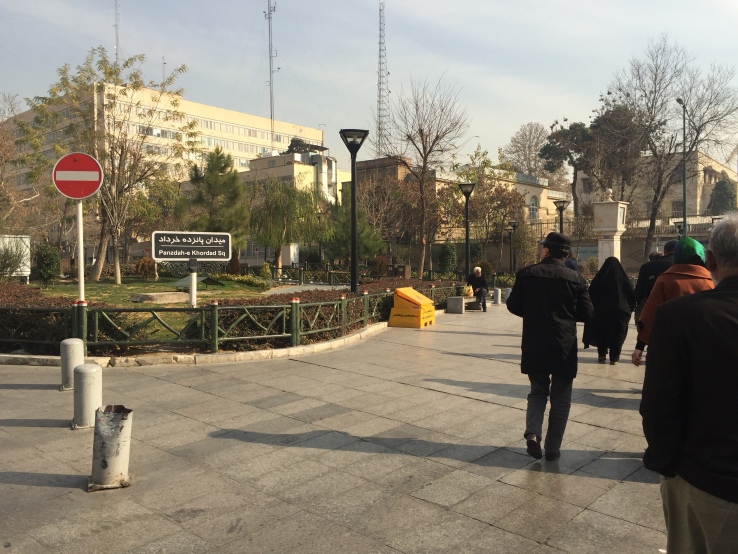 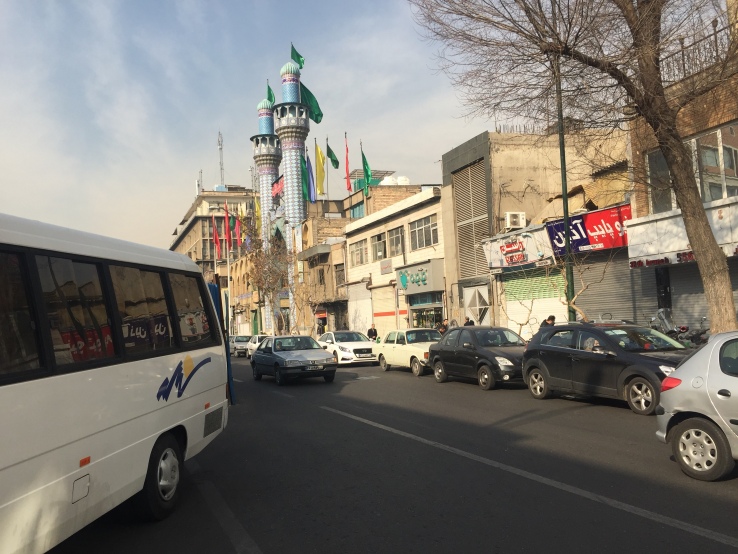 The Kitābkhāna or the Library

In the Manuscript library, Golestān contains a large number of Safavid and Mughal manuscripts as well as folios decorated with beautiful miniatures – both Mughal and Safavid. Unfortunately during my visit the librarian simply refused to show us any of them or even acknowledge their existence. These miniatures and folios are listed in the catalogues made during the pre-Islamic Revolution Period. Have they been shifted from here now? Or are still there? We failed to get an answer to this question. Here are some of the examples of the miniatures purported to be housed there: 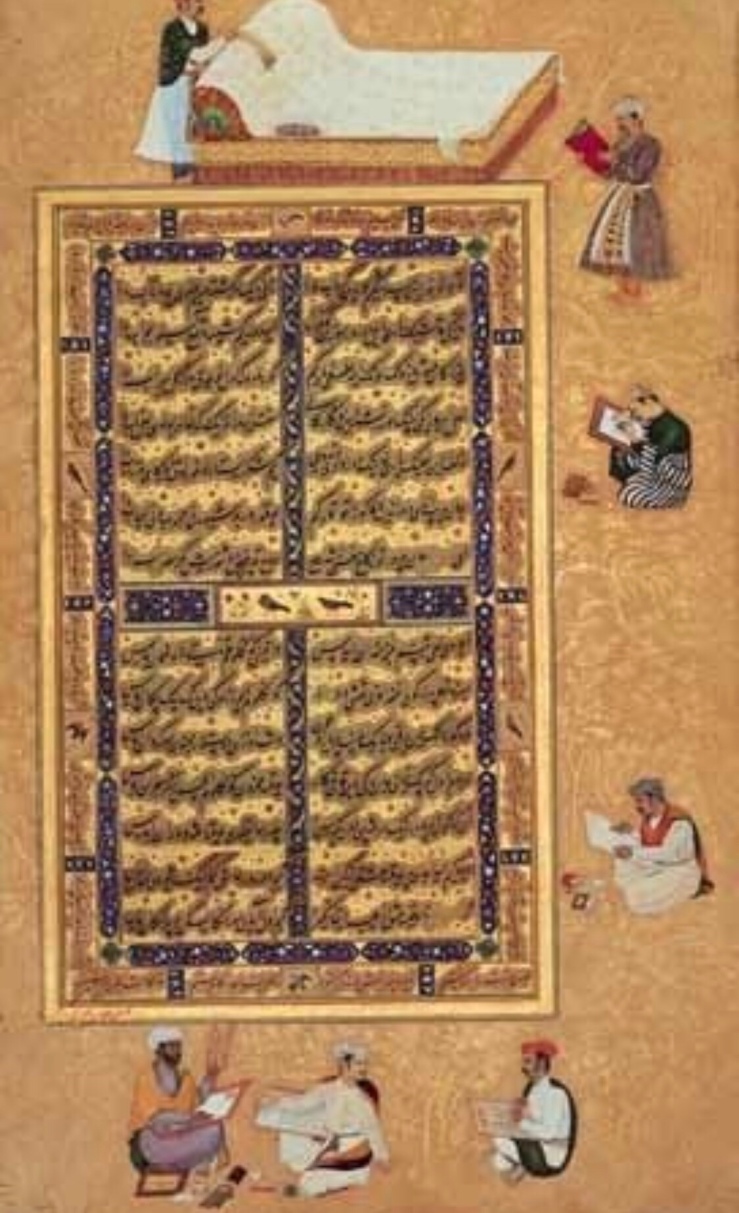 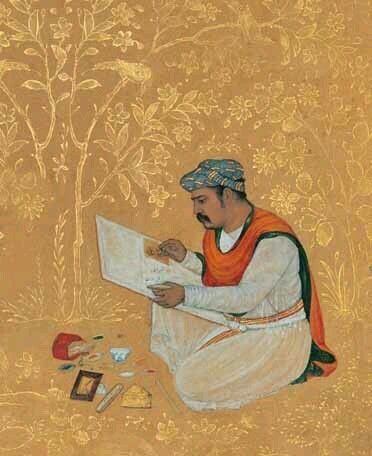 A self-Portrait of Daulat From the Gulshan Album, ca. 1610, Golestan Palace Library

Daulat. Portrait of Bishandas. ca. 1610 Detail of the border illumination of the list from Golestan Palace Library

The Ghadīr Khutba of the Prophet and Declaration of Ali as his Successor, A Safavid miniature: 16th Century, Golestan Palace 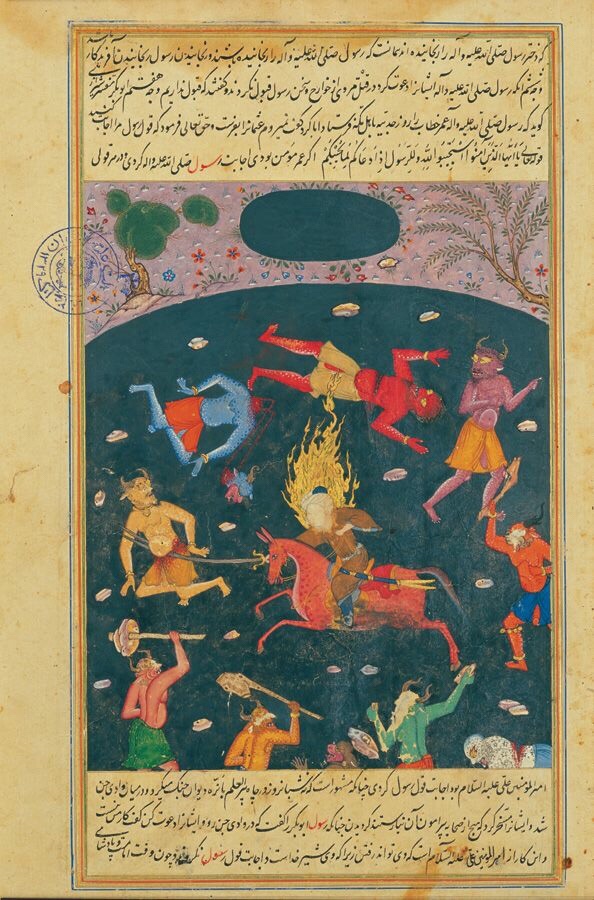 The museum also has a gallery which holds several paintings from the original Qājār collection (in particular paintings of the royal court), and a selection of European paintings which were mostly accumulated during Nāsiruddīn’s reign: 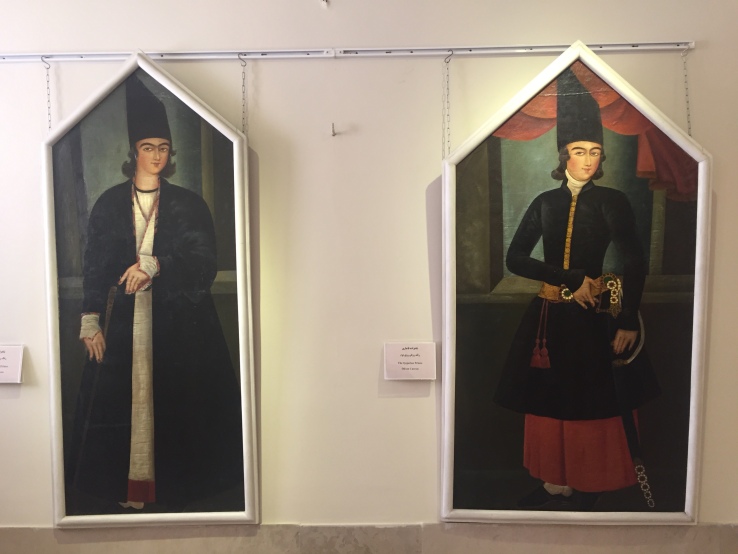 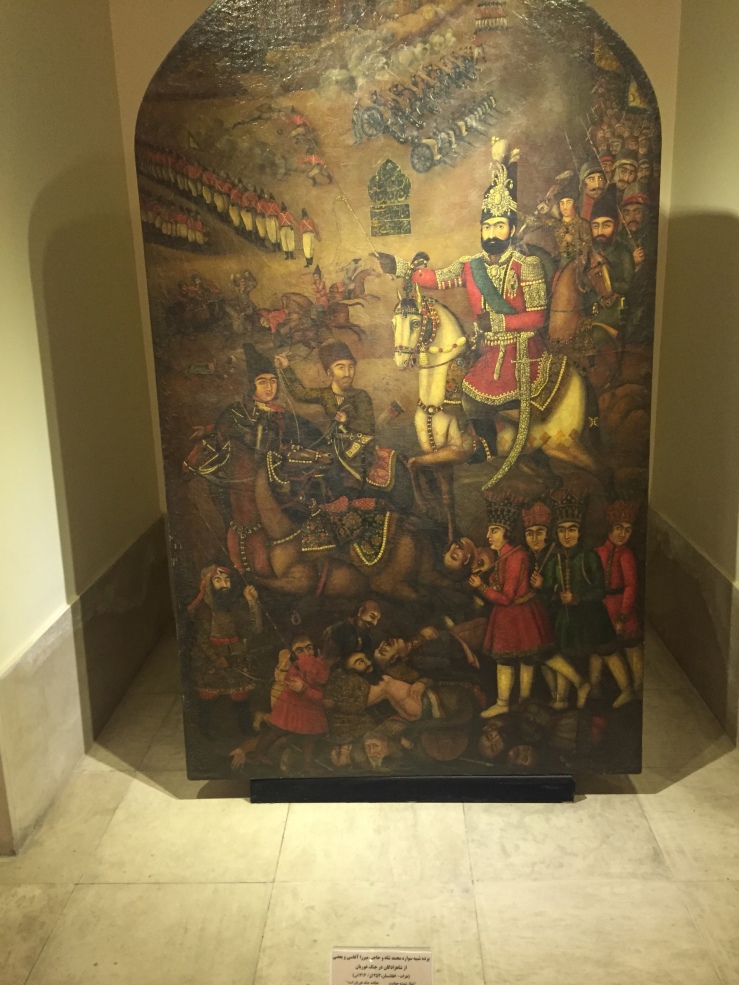 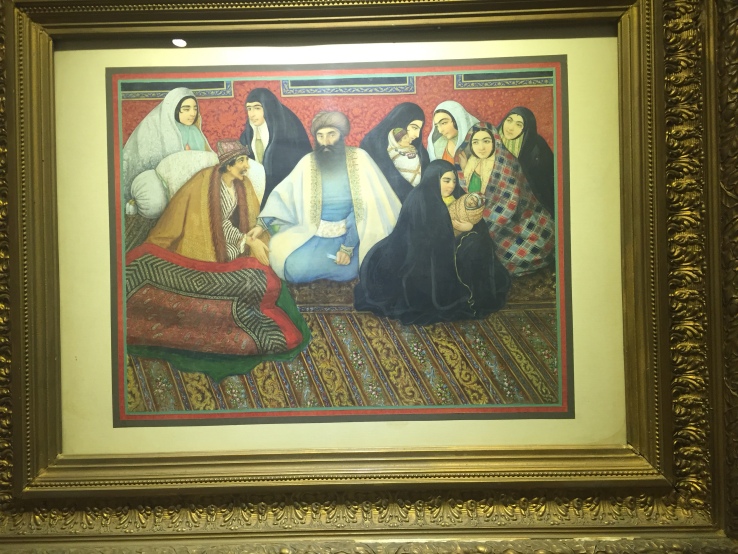 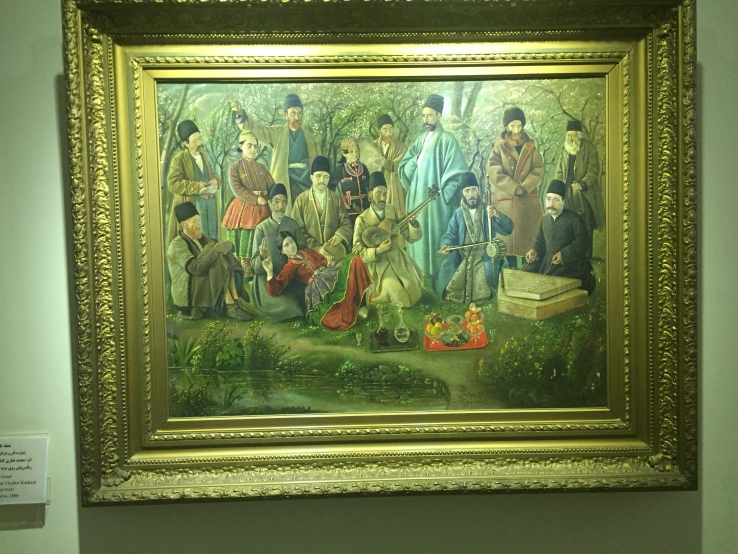 The most user-friendly section of the Golestān holdings is the photo archives. There are approximately 9,000 photographs in these holdings, although only a fraction of these are readily available to researchers.

It is an impressive collection which is organized according to albums which were made by the Qājār court, and often, by Nāsiruddin Shah himself.

Many of the photographs give insight into the daily life of the residents of the court, including an incredible survey of haram photographs that depict the women who resided in the court, the many trips that the royal family took—most notably, Nāsiruddin’s infamous hunting trips—as well as portraits that depict the court hierarchy and the various characters within it. Quite a few of these photographs were taken by Nāsiruddin himself and have his hand-written notes permanently marked on them. The first page of each album also has information pertaining to its content including date, name of photographer, and basic description.

A few specimen examples are:

Some of the king’s wives with a cleric.

Mirza Reza Kermān who assassinated a king in 1899

Women of a Qājār family

This is the most famous of the halls of the Golestan Palace. This relatively small hall is famous for its extraordinary mirror work. The hall was designed by Haj Abd ol Hossein Memar Bashi (Sanie ol Molk). Yahya Khan (Mowtamed ol Molk), who was the Minister of Architecture, was a consultant for the designer. 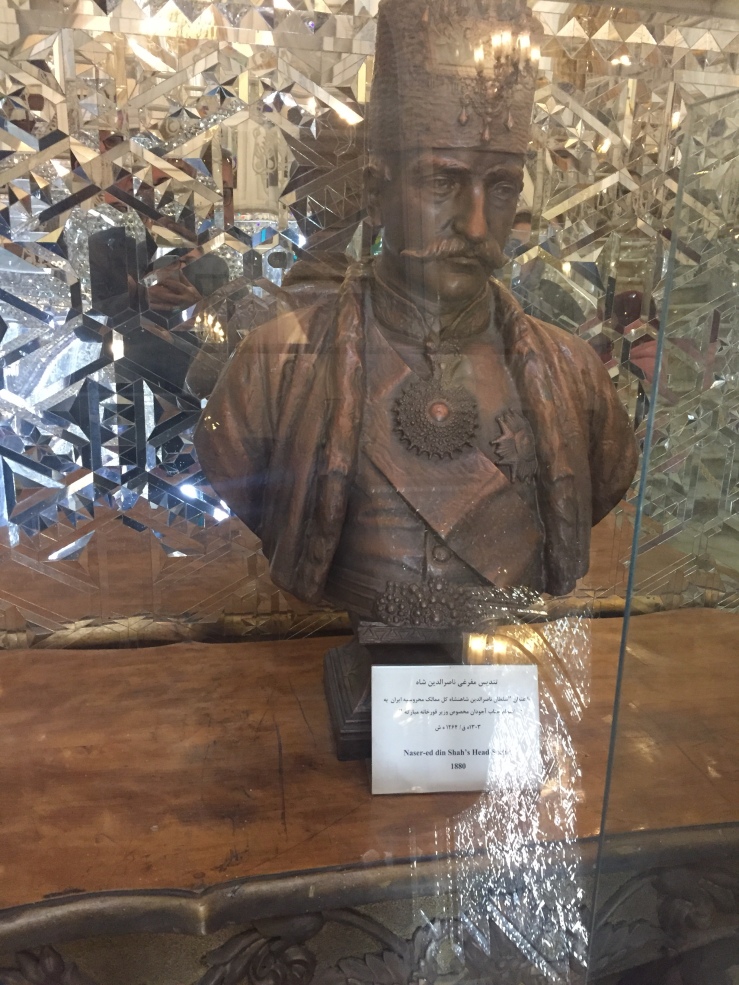 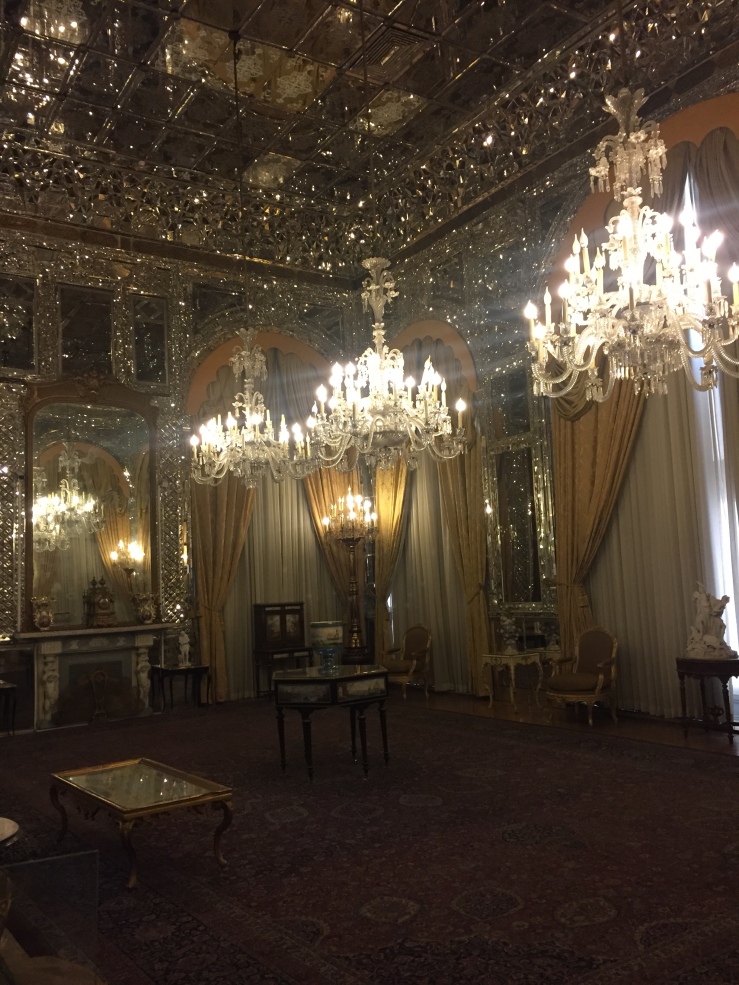 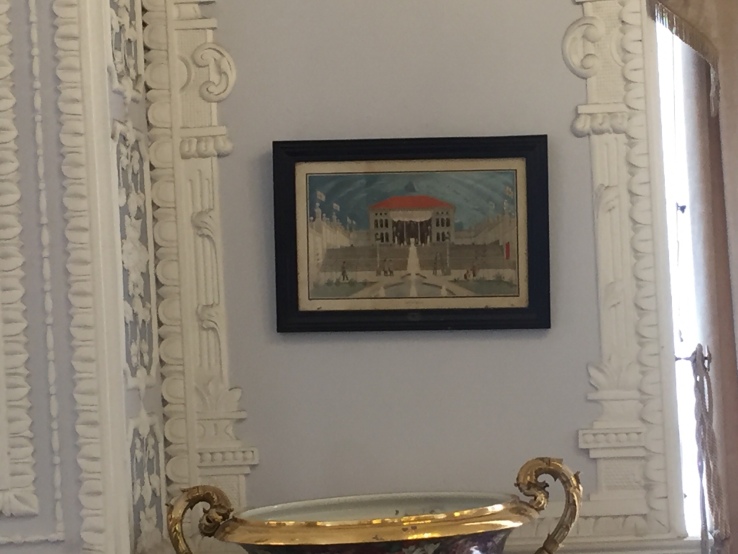 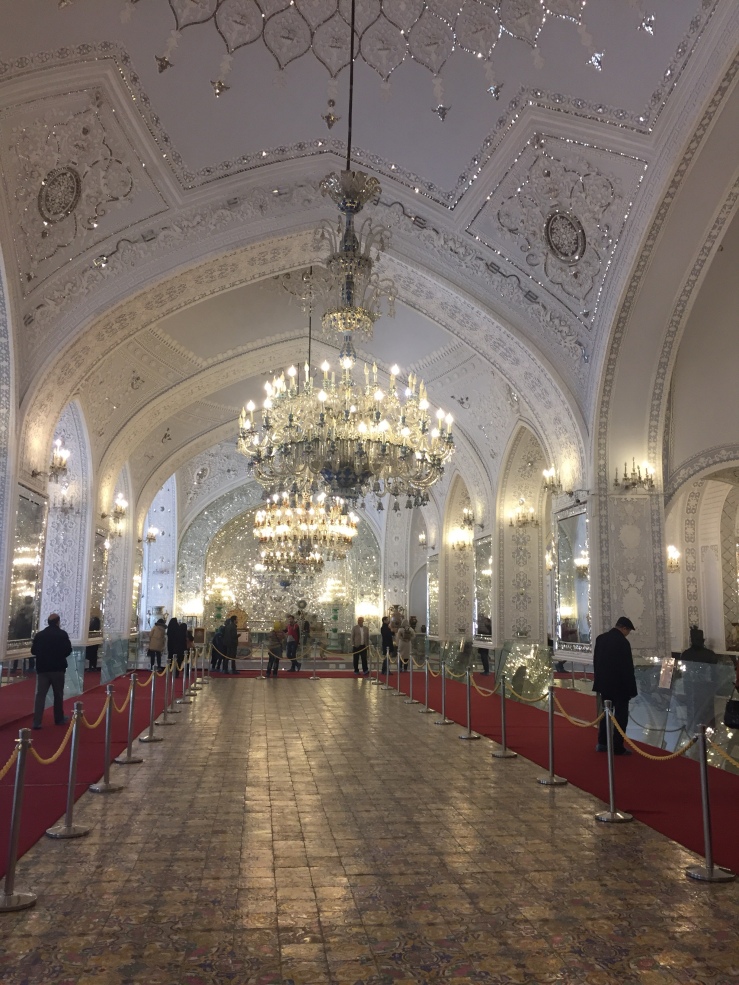 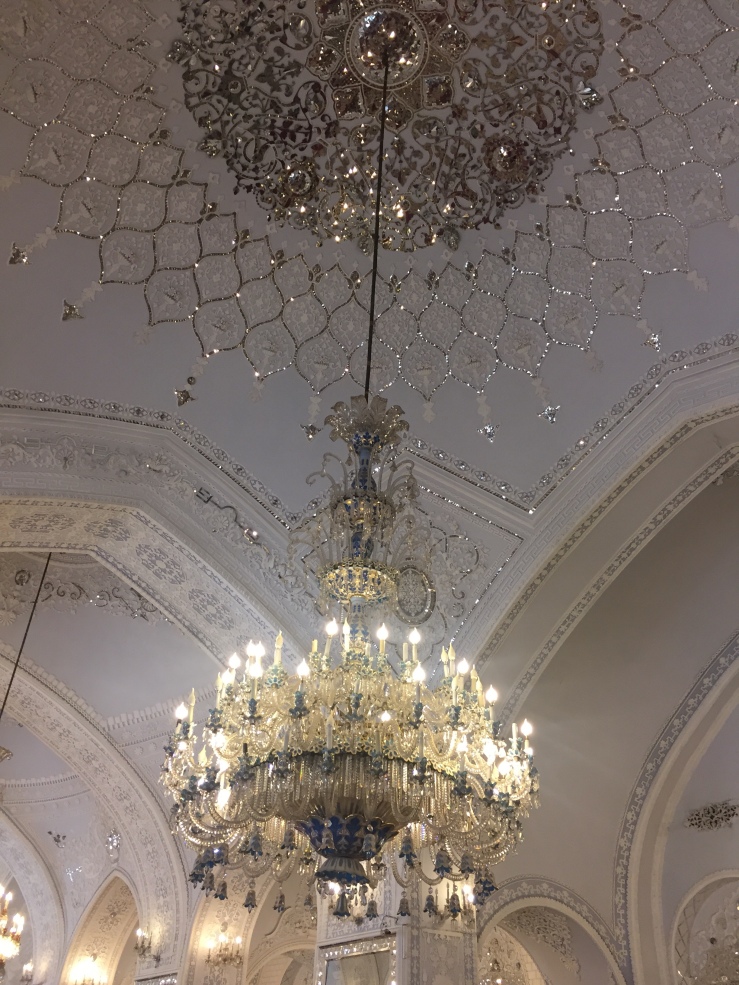 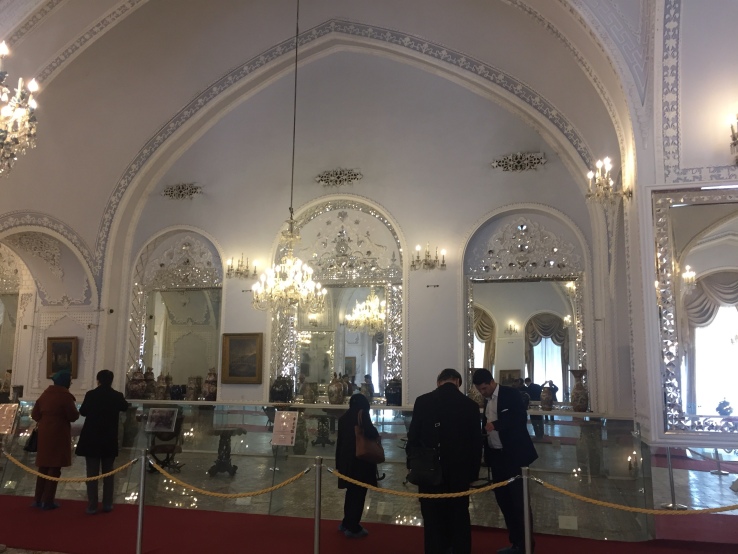 Tālār-i Salām and Khalvat-i Karīmkhāni apart from the bādgīr are some of the other important structures in the palace complex. 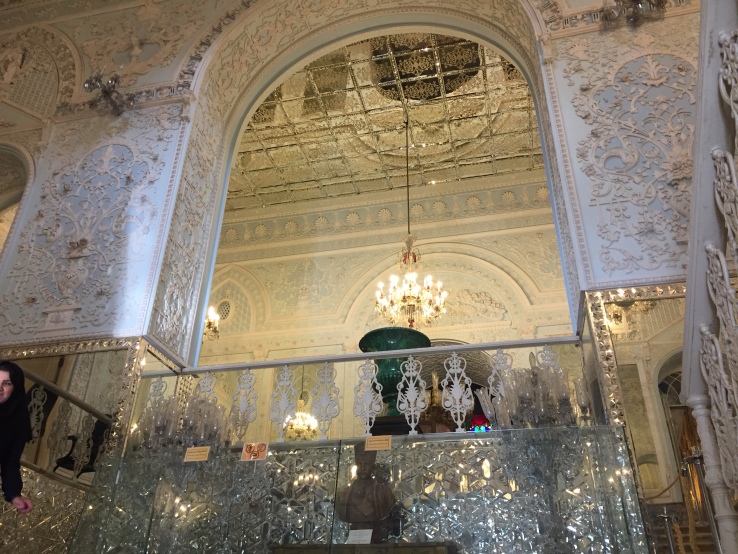 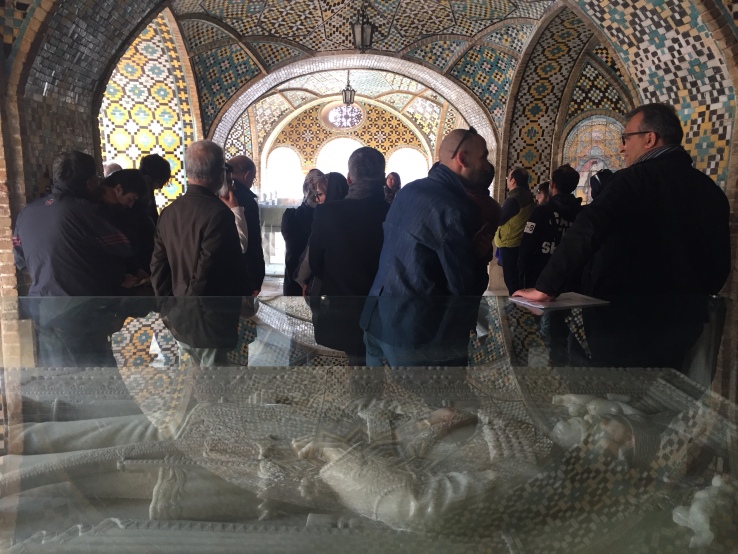 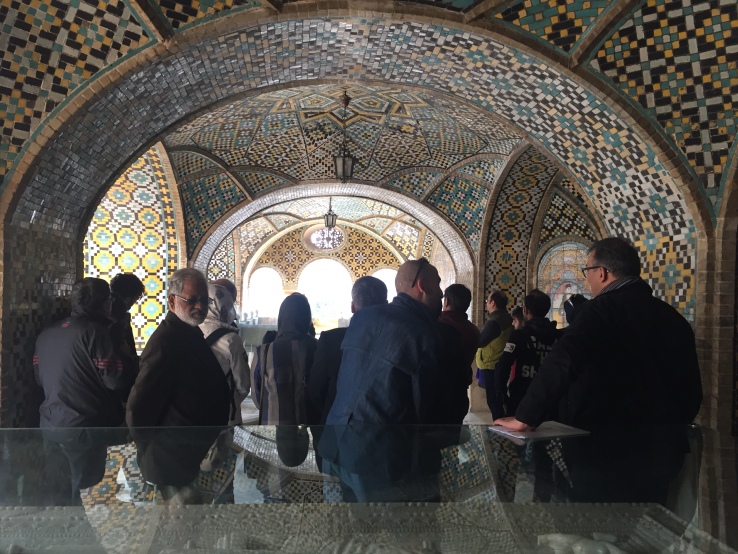 Without doubt it was a wonderful experience for me to have visited this palace of the erstwhile kings of Iran! It was a day which I can not easily forget! There was much more than what I have recorded here. Hopefully I will revisit this site and see what I had missed this time!

I just want to mention one more fact: as you go in, or come out, you are greeted by a large portrait of Ayatollah Khomeini adorning a mosque constructed on the other side of the road just besides the entrance gate. He seems to look directly in your eye to remind you of the transient nature of this world: Today the world is free of Shahs and their opulence! What remains behind are the result of their deeds…

[This blog is dedicated to Dr Ali Dehgahi, Cultural Councellor to India, Islamic Republic of Iran who facilitated my visit to Iran in January 2018]