A unique ritual widely prevalent amongst the Twelver Shi’i on the occasion of the birth anniversary of the Twelfth Imam is that of “Arīza“. The term ‘arīza literally means a petition of a person to someone higher in status.

The concept is that as al-Mahdi, the twelfth and the final Imam of the Prophet’s Household is alive but hidden and taking care of us and the world, we write to him our petitions pleading our case. He, like any other ruler, receives them through the agency of any one of his deputies, four of whom are known. 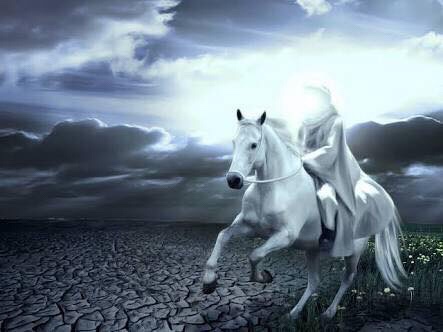 Imam Muhammad b. al-Hasan al-Askari was born in Samarra in AD 868 and until 872 when his father was martyred, lived under his father’s care and tutelage. He was hidden from public view and only a few of the elite among the Shi’ah were able to meet him. In AD 873 he was hidden and went into Occultation.

During the period of Minor Occultation, he was in contact of certain people and had four Nawwabein, deputies, through whom he worked. They were:

After 80 years of the Minor Occultation, the Major Occultation started during which the Imam interacts only with whom he wants!

During this period of major occultation he is represented only through his naibs, the marja‘ (the Jurisconsults) and the people communicate with him through the ‘Arīza or the petitions which they send to him. If one looks at these formalised petitions which have a set format with space to add your own seeking, we find that they mention the names of the above named ‘agents’ or deputies who are still supposed to present them before the Imam.

A typical arįza is as follows:

I have written to you O my master, may His mercy and blessing be on you, seeking a favour from you.

I have complained to you for what has happened to me seeking solutions firstly from Allah and then from you for a matter that has obsessed me.

I am helpless in combating the problem and for that I have resorted to seeking help from Allah and from you. Knowing the status you have with Allah.

I am confident that you will help me get the solutions to my problems swiftly and that you will intercede on my behalf. I am helpless and moreover I am sinful:

so help O master and present this problem to Allah and I pray to Him that He will solve this quickly and grant me victory and success in finding the solution to my problems.

(Write your personal wishes and problems in the provided space)

I am not able to carry or bear with it. Although I am responsible for the increase of my sins and ignorant about my responsibilities (Wajibaats), from Allah which are given to me.

So help me O my master.  Peace be upon you during this time of problems and sorrow.

presents my prayers to Allah before I compensate and before my enemies engulfs me. For you have shown me your blessings.

So I pray to Allah for great salvation and near victory with calmness from all fears,

for Allah is most high and does what he wants. Allah is sufficient for me from beginning and in my hopes.

Whatever Allah wish there is neither strength nor any power except in Allah the High, the Great.

*When dropping the Ariza in the sea/ river/ well, the following is normally recited, addressing Husayn bin Rawh, the 3rd Na’ib of the 12th Imam:

I bear witness that you died in the path of Allah and (hence), you are alive and are sustained by Allah.  am addressing you in your life which you lead with Allah – this is my note and wishes to the master of the Era, the 12th Imam (AS), so please hand it over to him for you are indeed trustworthy”. 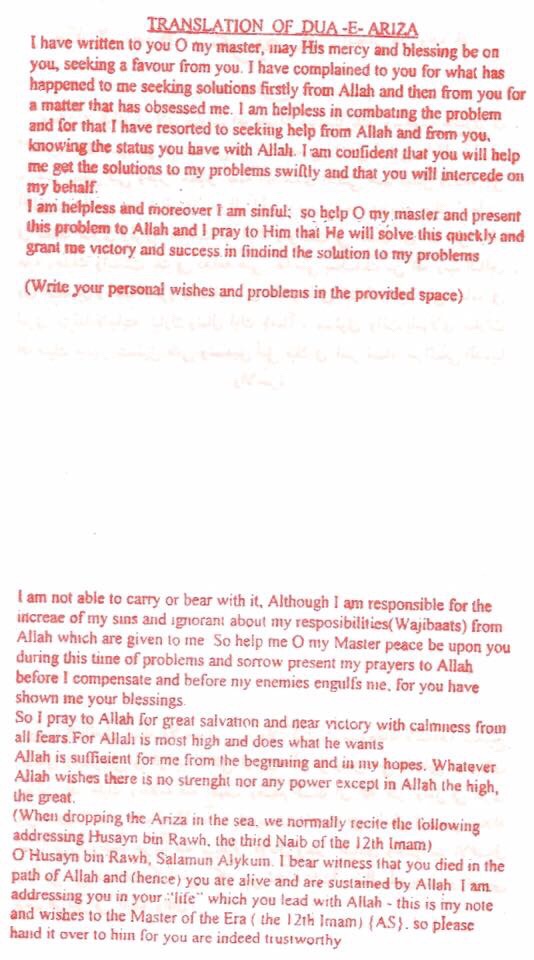 After the ‘Arīza has been written out, especially on the night of Shab-i Barā’at, these paper petitions are folded and placed within a ball of dough. With particular recitation of prayers, these dough balls containing the ‘arīza are then tossed into either blind wells or flowing waters, say a river or a barrage early at the dawn of 15 Shābān. It’s a real scene to be witnessed with people standing on the dark banks of rivers with trays full of ‘Arīza and flickering candles. Trays with halwa covered with well decorated cover cloths are also carried and distributed at the end. Special prayers followed by obligatory morning prayers are offered and people offer greetings and hug each other to celebrate the joyous occasion. Sometimes a mahfil is also held by the river banks in which poets recite their chosen verses, and an orator finally delivers a celebratory speech. In places like Lucknow boats are decorated with festoons and lights and people board them to drop their arīzas in Gomti. The end is marked by igniting crackers…. 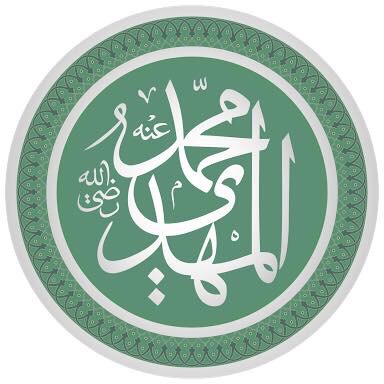 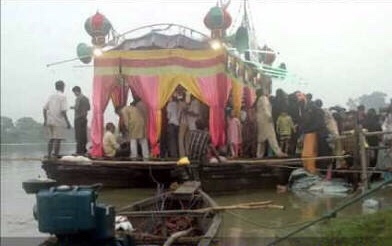 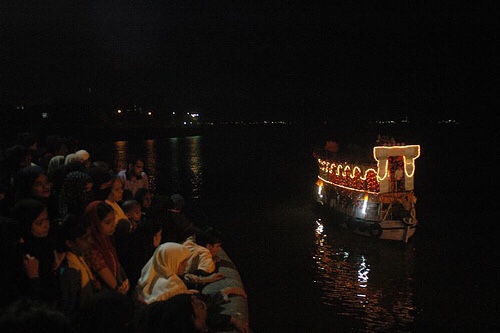