A perusal of the sources indicates that there was more than one method to extract indigo from the plants.

Linschoten is one of the first to describe the making of indigo at Cambay.

[it] is sown like other hearbes, and when [time and] season serveth, pulled and dryed, and then is made welle and beaten, and so certayne dayes after dryed againe, and then prepared. At first it is a fine greene, but after it is a fayre blew…

This ‘dry leaf’ method however is referred to in the context of indigo manufacture in the Sarkhej region only and is also mentioned by Mandelslo and Geleynssen de Jongh. According to de Jongh, as per this method, the leaves were sun-dried and then shaken off from the twigs and kept in a vat for 4 to 5 days. 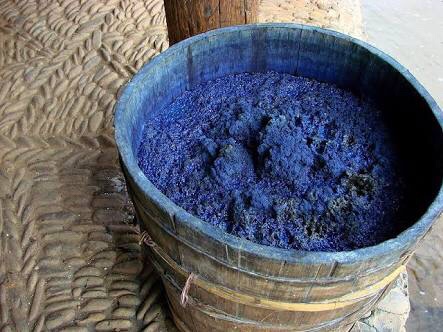 The soaking of the colour in water within the vat was further facilitated through repeated stirrings and beatings. The rotting leaves and the dye-soaked water were then shifted to another tank where it was let to remain for one or two days to let the heavy pigments of the dye to settle down. The clear water from the top was removed and the residue with the pigments was then strained and let to dry in the sun and ultimately

Joseph Salbancke visited Bayana in 1609 and his is the earliest eye-witness description of the technique of manufacturing and extracting indigo at Bayana. According to him, in the ‘Indico milles’ the plants after being cut

…lyeth on heapes for halfe a yeere to rot, and then by oxen it is trodden out from the stalkes, and after wards is ground very fine, and then boiled in furnaces, and so sorted out into severall sorts.

This ‘dry-leaf method’ is significantly not mentioned by any other contemporary traveller as far as North India is concerned.